Votes For Women and Other Plays 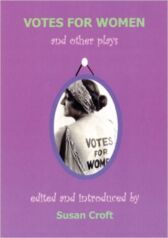 While "actresses" are specified in the organization's name, anyone working in the theatre was welcomed to join

Like other suffrage organizations of the time, they printed and distributed pamphlets and held meetings to educate women on suffrage

But it also produced suffrage plays

They launched themselves onto the political stage with their satirical plays, sketches and monologues whilst at the same time challenging the staid conventions of the Edwardian Theatre of the day

The legacy of their inspiring work to change both theatre and society has survived in the political theatre, agit-prop and verbatim theatre we know today

This Anthology includes seven of their seminal plays ...

How the Vote was Won ~ Cicely Hamilton & Chris St. John

At the Gates ~ Alice Chapin

In the Workhouse ~ Margaret Wynne Nevinson

A unique and important source book for colleges, universities, and libraries