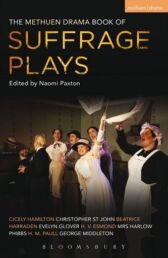 An anthology of eight exciting pieces written for and by members of the Actresses Franchise League from 1909-13, providing invaluable source material to students and scholars from a wide range of disciplines

As well as unfolding a unique insight into the social manners and ideas of their time, all eight plays are eminently playable, offering strong, varied roles for female casts

Lady Geraldine's Speech (1909), a fantastic, fun piece for actresses. Lady Geraldine hasn't thought through the Suffrage cause and, on a visit to an old school friend meets some charismatic, successful and intelligent women who soon enlighten and encourage her on to the right path!

Pot and Kettle (1909), a comic piece in which a young woman returns to her family in great distress having assaulted a suffragette who was sitting near her at a Anti-Suffragist meeting

Her Vote by the actor and playwright Henry Esmond provides an interesting male viewpoint on the movement, criticizing the young suffragist for wanting to be part of a movement about which she seems to understand little

The Anti-Suffragist or The Other Side is a charming, clever monologue about a sheltered young woman who finds herself increasingly involved with her local Anti-Suffrage society and increasingly puzzled by what she learns there

And finally, there's Tradition which was first performed at a matinee for the Woman Suffrage Party held at the Berkeley Theatre in New York City on Saturday 24 January 1913

These plays articulate the arguments of the Suffrage Movement through a variety of styles, both comic and serious, and perfectly illustrate the use of drama as a medium for social change and entertainment

How the Vote Was Won ~ Cicely Hamilton and Christopher St John

The Anti-Suffragist or The Other Side ~ H. M. Paull

"The book is a testament to the talent, tenacity and passion of those women artists who so ardently pushed the Votes for Women agenda" ~ Kate Kerrow, For Books' Sake

"A fine collection of eight plays of different genres created by members of the Actresses Franchise League (1909-1913), which are clever and often very comic. These unjustly neglected plays recall the passion and bravery of that remarkable political struggle" ~ The Lady