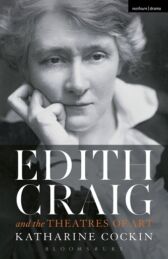 This new biography explores the extraordinary life of Edith Craig (1869-1947), her prolific work in the theatre and her political endeavours for women's suffrage and socialism

At London's Lyceum Theatre in its heyday she worked alongside her mother, Ellen Terry, Henry Irving and Bram Stoker, and gained valuable experience

She was a key figure in creating innovative art theatre work

As director and founder of the Pioneer Players in 1911 she supported the production of women's suffrage drama, becoming a pioneer of theatre aimed at social reform

She captured the imagination of Virginia Woolf, inspiring the portrait of Miss LaTrobe in her 1941 novel Between the Acts, and influenced a generation of actors, such as Sybil Thorndike and Edith Evans

Frequently eclipsed in accounts of theatrical endeavour by her younger brother, Edward Gordon Craig, Edith Craig's contribution both to theatre and to the women's suffrage movement receives timely reappraisal in Katharine Cockin's meticulously researched and wide-ranging biography, released for the seventieth anniversary of her death

Preface: A Note on Sources and More Dramatic Lives

Chapter Three : 1903-07 The New Woman Experiments and the Genealogy of the 'Scala masque'

Chapter Eight : Conclusion: On the Theatres of Art

"Full of fascinating nuggets of information ... Edith Craig and the Theatres of Art presents a collage of Craig's achievements, celebrating her maverick career." Times Higher Education