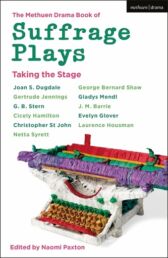 As with its predecessor, Suffrage Plays - Taking the Stage provides invaluable source material to students and scholars from a wide range of disciplines

And again, as well as unfolding a unique insight into the social manners and ideas of their time, all the plays are eminently performable and offer particularly strong, varied roles for women

It features a wide variety of short pieces and one-act plays written by female and male suffragist writers between 1908-1914.

Spanning different styles and genres they explore many issues that interested feminist and suffragist campaigners, such as:

The value of women's work

Direct action and its consequences

And the influence of the media on public opinion.

Edited and introduced by Dr Naomi Paxton, the anthology is brimming with in-depth knowledge, photographs and contextual information of the period making for an informative and inspirational volume that's perfect for both performance and study

This will introduce the role and importance of theatre and performance in the Edwardian suffrage campaign, and introduce each piece in turn with its original performance context, biographical information about the writer and an analysis of its particular themes and ideas

Based on Mrs Jarley's Waxworks, a very popular late-Victorian and an early-Edwardian entertainment, Hamilton's Anti-Suffrage Waxworks

The original script does not survive, but Paxton recreated the piece from contemporary descriptions of the Anti-Suffrage Waxworks and through the format of Mrs Jarley's Waxworks

In this ensemble comedy, a group of suffragist women kidnap the Prime Minister and refuse to release him until he agrees to give women the vote

It was originally performed at the Haymarket Theatre, London

This popular suffrage play explores the topic of female 'sweated' labour, and the relationships between women and men

Woman This and Woman That ~ Laurence Housman (1910)

This poem - a pastiche of Rudyard Kipling's Tommy, was popular within the campaign and championed by the Actresses' Franchise League and Sylvia Pankhurst's East London Federation of Suffragettes

This piece is set backstage in a touring pantomime, and looks at the pressures of life on the road for young actresses

In this short play, the family of a suffragette meet to hear the reading of her Will

And some of them do not like what they hear

It presents a snapshot of Edwardian London that is fascinating, and is a good stimulus for work-shopping and devising material around visibility in public space

This short play features a young nurse, who has been offered a job overseas

She comes to tell her father about the opportunity, but he is not as pleased as she had hoped