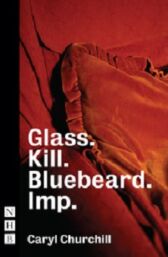 A girl made of glass

And a secret in a bottle

Glass. Kill. Bluebeard. Imp. is a collection of four new short plays from Caryl Churchill, one of the world's most critically acclaimed playwrights

Following in the footsteps of her previous hits Escaped Alone, Love and Information, A Number and Cloud Nine, this highly anticipated drama has its world premiere at the Royal Court Theatre, London, September 2019