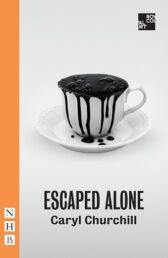 Vi, an ex-hairdresser with a criminal past

Sally, who worked in medicine and fears cats

And Lena, who has agoraphobia

Who has visions of apocalypse and catastrophe

"There is something very interesting in the fact that Caryl has written a play for four women within her age range. The thing I find incredible is its dramatic simplicity ... it is deeply domestic yet within that the form is one of the most challenging things you will ever read" ~ Vicky Featherstone, artistic director of the Royal Court

"5 Stars ... A menacing, joyous, brilliant return ... it's hard to imagine you'll come across a more brilliant play this year' ~ Time Out

"5 Stars ... A magnificent show which demands repeated viewing to reveal its full richness" ~ The Arts Desk

"This is Churchill at her best" ~ Guardian