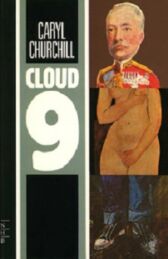 A landmark play about sexual politics in colonial Africa and modern-day Britain, in which all our assumptions about sex and gender are stunningly exploded

Set in both colonial Africa and modern-day Britain, Cloud Nine is about relationships between women and men, men and men, women and women

It is about sex, work, mothers, Africa, power, children, grandmothers, politics, and money

It has since been staged all over the world

'Sharp comedy and a serious purpose are splendidly combined ... It unlocks the imagination, liberates the mind, and leaves you weak with laughter' ~ Time Out

"The play that established Caryl Churchill as the most imaginatively daring of our major dramatists; and, nearly 30 years after its premiere, it still seems not only remarkably inventive but as sharp about the contradictions of gender as anything that has been written since" ~ The Times