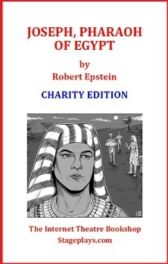 This ancient history play continues the story of Joseph, now Minister to the Pharaoh of Egypt

Around 1720 B.C.E., a group of foreigners referred to as Hyksos invaded the land of the Nile at a time of political chaos

Joseph is accused of being a military threat and possible traitor

Joseph's sons then fight a civil war for control of the Egyptian Empire ...

This Charity Edition incudes a $10.00 donation to the Jewish War Veterans, Texas, USA