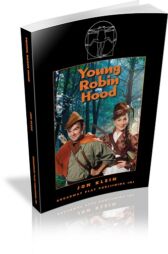 Large Mixed Cast
Travel to Sherwood Forest for some swashbuckling fun in this rousing new version of the classic adventure story ...

Long before he robbed from the rich to give to the poor, the famed archer was just another teenager honing his skills

The King is off on the Crusades and Nottingham is at the mercy of the corrupt Sheriff, who twists the law and persecutes the poor

But when his dad is falsely imprisoned, Robin must step up and orchestrate a rescue mission

Friendship is tested and new alliances are formed as Robin fights tyranny and injustice, with the unexpected help of the Sheriff's feisty daughter, Marian

"The twist in Jon Klein's new play is that Robin's a teen, and the story is geared to family theaters. That's a growth niche, and Klein's Young Robin Hood stands a good chance of becoming a staple. Klein makes the expected updates - you don't have to be a white male to get a good role in this show - and gives young Robin an early adventure against Nottingham's flamboyantly villainous sheriff swashbuckles along with the brisk, nearly mindless efficiency of a popcorn picture. Klein's scripts have been known to hit the mysterious sweet spot for regional theaters Young Robin Hood is nothing if not playable" ~ Nelson Pressley,The Washington Post