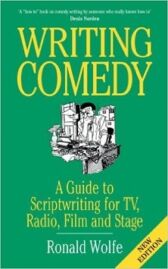 Packed with hints, tips and warnings, this is the complete newly revised guide through the minefield of comedy writing

Sub-titled A Guide to Scriptwriting for TV, Radio, Film and Stage, experienced scriptwriter Ronald Wolfe reveals the secrets of the trade

Sharing his success with the reader, Ronald Wolfe explains how to get started in the business and how to present your ideas in an impressive way

He explains the different techniques required for TV, radio, stage and film, and includes sound advice on working methods

Maurice Gran and Laurence Marks, creators and writers of Birds of a Feather, discuss their experiences of team writing

The book is full of good advice from such top scriptwriters as Carla Lane of Bread, Jack Rosenthal, Barry Cryer and Alan Plater

Ray Galton recalls writing Hancock's Half Hour, and Andy Hamilton tells how he and Guy Jenkin created Drop the Dead Donkey, and Ian Brown, one of the writing team, tells of the American style teamwriting of My Family

Is it harder for women to break into comedy?

Experience and advice are given by Beryl Vertue, executive producer of Men Behaving Badly and Coupling

Actors like Tony Robinson and Warren Mitchell reflect on their experience of working with comedy writers, and producers and directors

Crammed with examples from the scripts of well-known series and crisp analysis of comic formulae, Writing Comedy is a book every comedy scriptwriter will value

'Along with a rich father-in-law, a good suit, curiosity, venom and innocence, there is nothing a young man or woman contemplating writing television comedy needs more than Ronnie Wolfe's indispensable book' ~ Frank Muir

'This is a must for all aspiring comedy writers' ~ Andy Hamilton co-writer and co-producer, with Guy Jenkin, of Drop the Dead Donkey

'I only wish I'd had it when I first started writing' ~ Jimmy Perry co-writer, with David Croft, of Dad's Army, Hi-de-Hi, It Ain't Half Hot Mum and You Rang M'Lord

'... if Oxford or Cambridge ever establish a Chair of Comedy, Ronnie Wolfe should be the first professor' ~ David Croft co-writer, with Jeremy Lloyd, of 'Allo 'Allo and Are You Being Served?