Wrecks and Other Plays 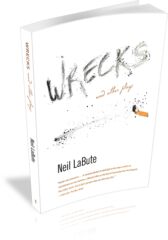 Can someone honestly love a person whom they have deceived for thirty years?

This is the central question behind Wrecks

Meet Edward Carr: loving father, successful businessman, grieving widower. In this concise powerhouse of a play, LaBute limns the boundaries of love, exploring the limits of what society will accept versus what the heart will desire

A college student veers between idolatry and vengeance

A New York couple part. He goes to the office, she to a clinic. As events unfold, it becomes clear that this is very far from an ordinary day.

An amateur comic struggles with his new routine

A group of actors addresses the audience. Are they performing a script or sharing personal stories?

Jacob, a nice young man, eagerly anticipates a meeting with the Internet friend with whom he's corresponded for months. When the young lady finally arrives, Jacob informs us of his plans for her

A woman waits at a table

She's very sure he's going to show up

He's a little late, but he always shows up. It's their anniversary after all. All right, once or twice maybe he didn't show up

Perhaps she'll wait just a few more minutes, because he will show up

"[LaBute's] cruel wit and chronicles of immoral moralizers have made him, arguably, the most legitimately provocative and polarizing playwright at work today" ~ David Amsden, New York Magazine

"[LaBute] continues to probe the fascinating dark side of individualism [His] great gift is to live in and to chronicle that murky area of not-knowing, which mankind spends much of its waking life denying" ~ John Lahr, The New Yorker