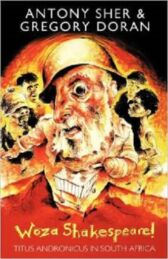 This is an account of their extraordinary journey - from the historic first visit of the Royal National Theatre Studio to South Africa in 1994, to the rehearsals and controversial opening of Titus at the Market, and the acclaim that greeted its subsequent performances in London, Leeds and Spain

This is not only a fascinating insight into how a director and actor approach a classic play, it is also a portrait of theatre in South Africa, emerging from the dark ages of apartheid, and a moving and often funny account of Antony Sher's professional debut in his homeland