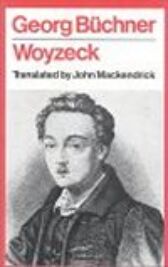 Written in 1836, Woyzeck is often considered to be the first truly "modern" play

The story of a soldier driven mad by inhuman millitary discipline and acute social deprivation is told in splintered dialogue and jagged episodes which are as shocking and telling today as they were when first performed, almost a century after the author's death, in Munich 1913

This volume contains an introduction and notes by Michael Patterson