Winchelsea Dround And Other Plays 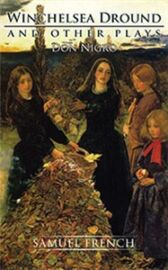 The nine short monologue plays in this Collection are ...

In 1927, a young woman sees the story of her life in a painting by Millais of her sisters gathering leaves. Her tragic affair with her brother, her estrangement from a beloved sister, the birth of her illegitimate daughter, her reconciliation to dying and becoming a ghost, and her final understanding of her life's curious beauty

A razor tongued, opinionated, eccentric antiquarian with an explosive temper and a colorful vocabulary rants against his enemies, his friends, his rivals, Sir Walter Scott, ungrateful boogers, meat eaters, literary scum, constipation and the French itching disease in this funny monologue about the relationship of chaos and truth on the border of madness

In this complex monologue, a man confuses his life in contemporary Pittsburgh with vivid memories of a simultaneous existence as Jesus. These identities interpenetrate his struggle to work out his relationship with Mary Magdalene and to perceive the nature of salvation. Pontius Pilate, the Pittsburgh Pirates and Lazarus coexist in the troubled world of the speaker as he shares his torments

This monologue takes us into the mind of a deaf, mute old lady who witnesses the epic battle between a vicious, vulgar man who marries into her family to steal the farm and a fat, old tomcat. A plague of mysterious killer walnuts, a nephew wielding an ax, and an army of family skeletons

Madeline's encounter with an insane Frenchman on a bus jolts her back to intense moments of her life spent naked in the rain with friends. Also evoked are fantasies involving Charles Boyer, Toulouse Lautrec and the Werewolf of Paris. A play about the proximity of ecstasy and horror, this is a rewarding piece for a young actress

A paunchy, middle aged man in a rumpled suit wears mink ties, a sure fire conversation starter, until he encounters a strange girl, a raccoon and a 1914 Republic truck that give him first hand experiences with traps, horned and screaming fat women, and the urge to gnaw one's leg off. This is a fine showcase for a character actor

Braque has a problem: his friend Picasso sees a demonic squirrel in his new painting. The more Braque looks, the more he too can see it. His desperate attempts to paint out the insidious creature are devastating to his creative and personal life

A woman's new car rams her son against a wall as she frantically stomps on the brake. When the automobile manufacturer refuses to admit fault and sends carnivorous lawyers and public relations people to convince her that she is responsible, she takes matters into her own hands with chilling results

A young woman is obsessed with the ancient city of Winchelsea, now submerged in the English channel. She identifies more and more with its doomed inhabitants as she sinks into madness