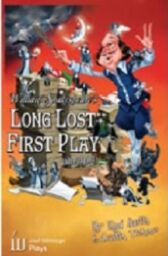 The Reduced Shakespeare Company presents the literary sensation of the Century!

Discovered buried beneath a parking lot in Leicester, UK, next to a pile of old bones, an ancient manuscript proves to be the long-lost first play written by none other than seventeen-year-old William Shakespeare

It's a discovery that has thrilled scholars across the world

The Holy Grail of English literature

An original manuscript, quilled by the Bard's own fair hand, featuring his most famous characters and familiar speeches

Presented in a brand-new story ...

And Viola and Richard III

And King Lear and the Weird Sisters

And - of course - Dromio and Juliet

Using questionable scholarship and street-performer smarts, playwrights Reed Martin and Austin Tichenor weave together most of the famous speeches and plot devices of Shakespeare's 39 plays to create a fast and funny fortieth, filled with witty wordplay and vaudevillian variety

And twins, twins, lots of twins!

"A cauldron full of belly laughs! Make no mistake, this is an absolute, resolute, hoot, of a bawdy comedy of errors" ~ Broadway World