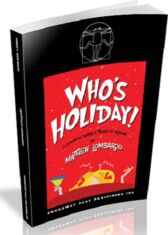 A raunchy One-Woman Show that runs about 75 minutes

Who's Holiday! is a wildly funny and heartfelt adults-only comedy

Forty years on, Cindy Lou is now a grown-up and Dr Seuss's yuletide tale is given an R-rated twist

The Critics loved it ...

"Though the years haven't been kind to Cindy Lou the booze-guzzling, cigarette-sucking bleached blonde stays lovably upbeat a comical riot, shining with moxie-laden tastelessness and irreverence. [Cindy Lou] engages front row audience members, sings with gutsy verve and even raps a bit. After an hour of lunacy, a sweet, sentiment ending is added, sending audience members off with a warm smile and probably exhausted from laughter"~ Michael Dale, Broadway World

"A raunchy riff on Dr Seuss's yuletide tale The little tyke has become a bottle-blonde adult who spends her days in a trailer appointed with Airstream functionality and seasonal kitsch brassy, very funny a holiday offering that dirties up Christmas while ultimately reveling in its spirit" ~ Elisabeth Vincentelli, New York Times

"In Matthew Lombardo's one-woman show, Cindy Lou Who is all grown up - and she isn't quite the adorable child you remember from Dr. Seuss's classic How the Grinch Stole Christmas! Chronicling the forty years that have passed since Cindy caught the Grinch in her living room ... a comic tour de force" ~ Carey Purcell, The Village Voice

"If your fond childhood memories include Dr Seuss
The Grinch, his dog Max, and a Ville filled with Whos
You might like a sequel from 40 years hence
Though if you're a Grinch, too, you might take offense.
The new play WHO'S HOLIDAY! by Matthew Lombardo
Is strictly R-rated, so don't bring your kiddo
Yet if your mind's open and you trust rave reviews
His Off-Broadway treat will come as good news!
Cindy Lou's now a grown-up, with all that it brings
Cocktails and cursing and smokes are her things.
She's led an adult life that's chock full of spice
Her shocking backstory's more naughty than nice.
She's hosting a Christmas Eve fête for her friends
It's her way of trying to make some amends
For all that she did before going to jail
Will the party succeed, or will it just fail?
At the ending we're left with a serious thought
Which underscores all of the laughter she wrought
That 'white trailer trash' Cindy Lou just needs kindness
It's good that WHO'S HOLIDAY!'s here to remind us."
-Deb Miller, DC Metro Theater Arts