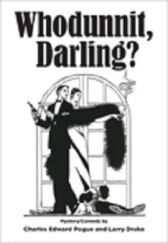 "It's a matter of life and death!"

And it was death

Dam's client, Horace Crenshaw, has been both stabbed and shot

She even fashioned her detective hero on him

But Dam was far from flattered

And because she's still in love with him

But Dam plays it close to his chest with both his ex-wife and the eccentric array of suspects ...

Lomax, Crenshaw's partner, whose voluptuous wife, Vera, was making a play for the deceased

Tex, the crusty cowboy owner of the dude ranch, heavily mortgaged to Crenshaw and Lomax

Dam wades through the clues and alibis

Full of wisecracks and witty repartee, this clever whodunnit requires only one interior set and runs about two hours

"It's a hit mystery!" ~The Marketplace

"The show just seems to sparkle" ~ The Journal-Messenger