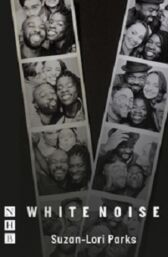 Thirty-somethings Leo, Misha, Ralph and Dawn have been inseparable since college

Making their way together in the big city, they are liberal, open-minded and socially aware

As best friends and lovers, confident in their 'woke-ness', their connection with each other is stronger than anything else - until Leo is assaulted by the police in a racially motivated incident

Shaken to the core, he brings to the group an extreme proposition...

It was first performed at The Public Theater, New York, directed by Oskar Eustis, and had its European premiere at the Bridge Theatre, London, in October 2021, directed by Polly Findlay

[White Noise is] “paced with precision, the performances flawless and engaging… Over and over, in the quick, spare dialogue, there are flashes of language redefined” ~ Kathleen Campion, New York Theatre Guide