What a Man Weighs & The World at Absolute Zero 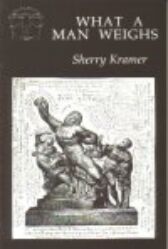 "WHAT A MAN WEIGHS is a contemporary romantic comedy with some serious things to say about sexual politics. Sherry Kramer's play is about a womanizer and the women around him in a book conservation lab at a large university. Book restoration is compared with life.... We're reminded that people's lives are like the pages of a book--everything leaves its mark.... WHAT A MAN WEIGHS weighs in as worth seeing." Leida Snow, 1010 WINS Radio

Also included, a one act, THE WORLD AT ABSOLUTE ZERO - unit set consisting of two interiors