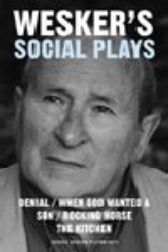 This includes the author's most performed work The Kitchen, first performed in 1957 and since produced in sixty cities from Rio de Janeiro to Tokyo, from Paris to Moscow, from Montreal to Zurich

The Collection also contains Wesker's latest play The Rocking Horse Kid, about a black boy who wants to go round the world on a horse, the magical play for children Voices on the Wind

And one of his most controversial plays - Denial about 'the false memory syndrome' declared by an irate French critic of the Paris production '...a dangerous play. Wesker is a dangerous playwright'

He has also been described as 'a melancholy optimist' as evidenced by another of the plays in this volume - When God wanted a Son which challengingly explores the possibility that anti-Semitism, like stupidity, is in the bloodstream of human nature and here to stay

Few playwrights dare be as politically incorrect as Wesker