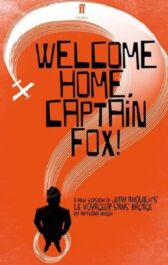 But is this really Jack Fox?

And why are there twenty-two other families so intent on claiming him as their own?