We Want You to Watch 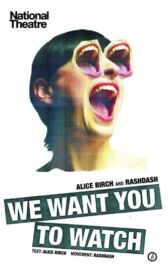 "Are you finding this harder to hear, is this more difficult on your stomachs because we are women?"

This is about pornography

This is an interview

This is an intervention

This is an interrogation

We want to pull its plug out

We want to stop its heartbeat

We want to blow its brains out and begin again

We know exactly what we're doing

An unsettling, powerful new piece of theatre tackling pornography and violence against women

"We Want You To Watch turns out to be about as joyous and life-affirming an experience you can have in a theatre while the world is still in the miserable shape it's in ... it makes a pretty compelling case that [pornography is] hardly the best thing in the world, and does table the more real worry that we have no idea what the effect of the super-proliferation of it will be on the world ... it's a hell of a compelling vision" ~ Andrew Haydon, Postcards from the Gods