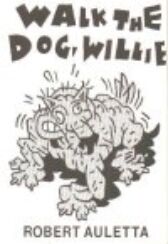 "Robert Auletta's script is a family drama with a difference... it has a frayed-edge poetry and wild-animal energy that turn its story, about a veterinary student and his feral foster brother, into an event that's half ritual and half nervous breakdown...." Michael Feingold, The Village Voice

"The first production of Robert Auletta's WALK THE DOG WILLIE was in 1976 at the Yale Repertory Theater. Sam Shepard's BURIED CHILD was written in 1978 or `79. I'm not suggesting that because of the evident similarity of the two plays Shepard must have borrowed from Auletta or been influenced by him.... No, something more interesting is at work here: a cultural confluence, an affinity of consciousness, a resemblance of attitudes, most specifically a shared sense of the heartland American family as rooted in strains of madness and violence, simultaneously sustained and corrupted by myths and bound by a love that more than touches on despair...." From Richard Gilman's introduction