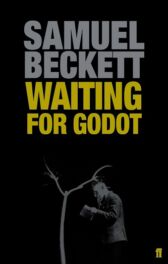 They dispute the appointed place and hour of his coming

And amuse themselves with various bouts of repartee and word-play

'Nothing happens, nobody comes, nobody goes, it is terrible'

Jean Anouilh's judgement on the first production of Waiting for Godot at the Babylone in 1953 went on to conclude that the play would, in time, represent the most important premiere to be staged in Paris for forty years

THIS IS THE FABER EDITION - for the ACTING EDITION
click here