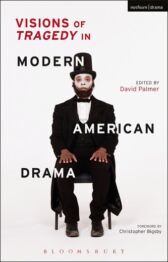 For students of American literature and theatre studies, the assembled essays offer a clear framework for exploring the work of many of the most studied and performed playwrights of the modern era

Following a contextual introduction that offers a survey of conceptions of tragedy, scholars examine the dramatic work of major playwrights in chronological succession, beginning with Eugene O'Neill and ending with Suzan-Lori Parks

With each chapter being short enough to be assigned for weekly classes in survey courses, the volume will help to facilitate critical engagement with the dramatic work and offer readers the tools to further their independent study of this enduring theme of dramatic literature

18. American Theatre Since 1990 by Toby Zinman, University of the Arts, USA

"Tragedy has always been a hard sell in America. Ours is a nation that, as scholar Christopher Bigsby states in David Palmer's superlative anthology Visions of Tragedy in Modern American Drama, "was not a natural home for the tragic spirit, having been wed since its beginnings to a melioristic ideal"

Nevertheless, Eugene O'Neill, the playwright heralded for transporting tragedy to the forefront of America's dramatic imagination, insisted that "truth, in theatre as in life, is eternally difficult just as the easy is the everlasting lie"

Tragedy, O'Neill argued, was hard-earned by audiences bold enough to look deeply and critically at themselves and their society, and this was what made it worthwhile

Visions of Tragedy covers many hard "truths" about America and its inhabitants, as unleashed by the nation's greatest tragedians from O'Neill to our own time

Each of the essayists-an all-star cast in American drama studies-presents their argument in vibrant prose and with expert critical insight, never getting bogged down in academic jargon or doublespeak Visions of Tragedy is destined to be a classic of American drama studies, clarifying and amplifying the diverse scope of tragic visions that have, for over a century, unflinchingly interrogated our shared national inheritance" ~ Robert M. Dowling, Professor of English, Central Connecticut State University

"Visions of Tragedy features an impressive range of insightful essays on major American dramatists from O'Neill to Suzan-Lori Parks several of which are focused on the tragic implications of the American Dream" ~ Bruce McConachie, Professor of English Emeritus, University of Pittsburgh

"Analyzing key works by the most significant American playwrights post-Eugene O'Neill, the eighteen essays contained in Visions of Tragedy in Modern American Drama provide important insights into how the ancient concept of tragedy takes form in specifically American contexts

The authors productively explore how these playwrights have situated the American Dream and probed the particularly U.S. dynamics of race and class, while at the same time delving deeply into questions of human suffering, fate, hubris, and complicity. In this way, the volume offers valuable new readings of fundamental plays from the American dramatic canon, while also proposing evocative new understandings of tragedy

This is a critical anthology that certainly will benefit and inform students and scholars of American drama ~ Harry J. Elam Jr., Olive H. Palmer Professor in the Humanities, Stanford University

"This is a well-designed introduction to major figures in the inherited canon of American drama ... This collection of essays by various hands on canonical U.S. playwrights from the modern and contemporary repertory has the potential to be a useful guide for students who may be approaching the material for the first time

The range of authors is appropriate and the list of possible and likely contributors is more than sufficient to the task at hand" ~ Enoch Brater, Kenneth T. Rowe Collegiate Professor of Dramatic Literature, University of Michigan

"I think this volume will fill a significant gap in the study of American drama and of tragedy, and will be welcomed by both teachers and student s... As far as I know there is no book that addresses the subject of tragedy in American drama in any comprehensive way, and there is certainly no volume of essays that does so

While this volume does not pretend to be exhaustive, it covers sixteen significant American playwrights of the 20th and 21st centuries, including those who are best known for their work in tragedy

The concept of the volume is well conceived and thoroughly thought out. The fact that eight of the essays originated in a conference panel on American concepts of tragedy means that the core essays exist, and their ideas have been tested before a professional audience

The unifying concept of the volume, basing the discussion of the plays on the playwrights' own ideas about tragedy, provides a coherent overall point of view for the essays, while still providing the range and variety that comes with the individual ideas of the playwrights and the interpretation of the essay authors

I think a real strength is that this volume shows the concept of tragedy as a living and evolving thing being worked out by the playwrights in the theater at the same time that they are trying to articulate their understanding of it" ~ Brenda Murphy, Distinguished Professor Emeritus, University of Connecticut

"This is a new essay collection of dramatic criticism by top notch scholars that explores the concept of tragedy how American dramatists, from Susan Glaspell to Suzan-Lori Parks, have developed a particularly American vision of tragedy

I would be very interested in seeing this work in print. The editor seems very knowledgeable and qualified; the contributing authors are brilliant; the focus/concept seems fascinating and worthwhile and original

The nature of tragedy is a question that has captured the imagination of theatre and drama lovers for millennia. It is also popular with audiences and artists

The playwrights included are popular with artists and scholars, so there should be significant interest in the book.

The concept is brilliant; it seems original; I don't know of any other work with this purpose and scope

The concept of Tragedy - its nature and meaning , on an aesthetic and socio-psychological level, has fascinated human beings for millennia. It's a very worthwhile undertaking and I believe this could be a fascinating book. The scholars who have committed to writing chapters are also eminently qualified. Superb choices

The structure, the organization, the length of essays, all seem very well-conceived in terms of the books intended audience" ~ Cheryl Black, Catherine Paine Middlebush Chair in Fine and Performing Arts, University of Missouri

They remind us of the various ways in which American Drama stages the compelling public issues of a nation as reflected through the private anxieties of the individual ~ Matthew Roudané Regents' Professor of English, Georgia State University