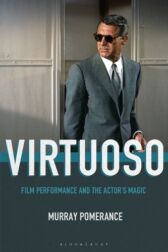 Elizabeth Taylor's electrifying performance in Who's Afraid of Virginia Woolf

The milkshake scene in There Will be Blood

What makes these performances so special?

Eloquently written and engagingly laid out, Murray Pomerance answers the tough question as to what makes an exceptional, or virtuosic performance

Looking at more than 40 aspects of the virtuosic act, and using an approach based in careful meditation and discursion, Virtuoso moves through such themes as showing off, effacement, self-consciousness, performative collapse, spontaneity, acting as dream, acting and femininity, virtuosity and torture, secrecy, improvisation, virtuosic silence, and others

Numerous scenic virtuosities are examined in depth, from films as far-ranging asSingin' in the Rain and The Bridge on the River Kwai, and My Man Godfrey

As the first book about virtuosity in film performance, Virtuoso offers exciting new angles from which to view film both classical and contemporary

Coda: A Thought of Conclusion

"In this extraordinary volume, Murray Pomerance acts as something like a spirit guide to the mysteries of cinematic performance. The text conjures a pageant of gestures, voices, faces and moments that exemplify virtuosity, accompanied by critical reflection that is never less than compelling. Pomerance's prose is itself virtuosic: lucid, penetrating, brilliant. It asks questions we didn't know could be asked, and never resorts to easy answers. This makes the book essential reading, not just for scholars and students of film performance, but for anyone interested in the art and magic of the cinema" ~ Dr. Alex Clayton, Senior Lecturer in Film and Television, University of Bristol

"From detailed examinations of such singular talents like James Dean and Cary Grant, to the subtler, fleeting, performative moments by virtuosos as varied as John Barrymore and Kristen Stewart, Murray Pomerance offers a new way of approaching, as well as a language for addressing, the riddling qualities of great film acting. What magic the actors explored in this book do with gesture, expression and inflexion, Pomerance does here with incisive description, analysis, and an often delightful turn of phrase" ~ Dr. Daniel Varndell, Senior Lecturer in English Literature, University of Winchester