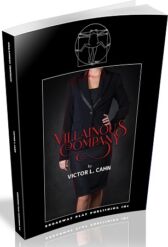 When Claire returns home from an afternoon of shopping, she discovers one of her packages is missing

And then manages to invite herself inside

Before long, larceny and trickery abound as the two women - soon joined by a third - compete in a suspenseful game of cat-and-mouse.

"Often funny and unendingly intriguing, it feels like an Alfred Hitchcock thriller" ~ Theatermania

"Unexpected twists, surprising character revelations, and an all-woman cast is part of the fun watching Villainous Company This is a diverting and mysterious tale where everything and everyone is not quite what they seem to be, which is part of the point and definitely most of the fun" ~ Tri City News