View of the Dome 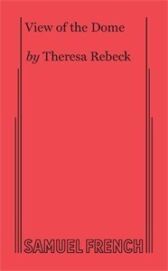 This humor filled tale of political corruption, ingratitude and revenge concerns an idealistic young Washington attorney who persuades her former law professor, a man of lofty rhetoric, to run for Congress

Ideals shrivel in the Washington air as the professor is swept into an insider's circle that includes a leering, power drunk senator and a slinky Southern power broker

When the heroine is snubbed by the politically powerful at a fancy restaurant, her hurt feelings precipitate an all out war