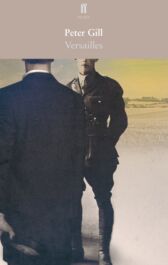 Large Mixed Cast
In the drawing room of the Rawlinson's late Victorian villa in Kent, life as it was lived before the war is quietly resuming

The family's son, Leonard Rawlinson, is among the British delegation sent to Versailles to draw up the treaty that will come to define Europe, the Middle East and the rest of the world

With the ghost of a fallen loved one still haunting him, Leonard perceives that the choices made in Paris will shape the fate of millions for centuries to come

Versailles premiered at the Donmar Warehouse, London, in February 2014