Vanya and Sonia and Masha and Spike - GROVE PRESS EDITION 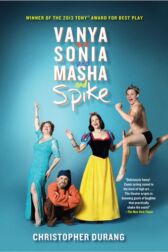 One of the most lauded and beloved Broadway plays of recent years, this beguiling farce weaves Chekhovian themes into a mad-cap weekend of costumes, prophecies and existential longing ...

Until, that is, their peace is suddenly disturbed when movie-star sister Masha returns unannounced with her twenty-something-toy-boy, Spike

And so begins a weekend of rivalry, regret, and raucousness!

"Deliriously funny! Comic acting raised to the level of high art ... the theater erupts in booming gusts of laughter that practically shake the seats!" ~ The New York Times

"The funniest show in town!" ~ Bloomberg

"Riotous! The kind of full-on comedy that's rare on Broadway. It makes you laugh out loud, and repeatedly at that!" ~ New York Post

"Nothing short of hilarious! It leaves the audience in tears of laughter!" ~ The Huffington Post

ACTING EDITION
Vanya and Sonia and Masha and Spike