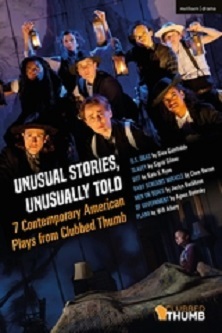 Spanning 2001 to 2019 and accompanied by artist interviews and reflections on the work, this anthology presents a vital survey of formally inventive 21st century playwriting, and is a perfect collection for study and performance

U.S. Drag by Gina Gionfriddo - A serial killer named Ed stalks the city, luring his victims by asking for help. To protect themselves, a group of New Yorkers form SAFE, “Stay Away From Ed.” The first rule: don't help anyone. It's a matter of urban survival

Slavey by Sigrid Gilmer - Robert and Nora, a couple on the rise, get a big promotion, a bigger house, and a brand new slave

Dot by Kate E. Ryan - Old Dot and the weird kid from the neighborhood become friends. Set in that kind of Florida town that makes you wonder - is this TV, a book, or maybe even a cabaret?

Baby Screams Miracle by Clare Barron - A freak storm knocks down all the trees in town and a prodigal daughter is taught a new way to pray. But the weird weather's not over yet

Men on Boats by Jaclyn Backhaus - Ten explorers. Four boats. One Grand Canyon. Men On Boats is the true(ish) history of an 1869 expedition, when a one-armed captain and a crew of insane yet loyal volunteers set out to chart the course of the Colorado River

Of Government by Agnes Borinsky - The adventures of Barb the Teacher, Deb the Seeker, Heidi the Helper, Tawny the Addict and a host of others. With songs! Presented by Miss Marjorie Blain, her students, and members of the community. Light refreshments will be provided

Plano by Will Arbery - Tonight, and later, and earlier, three sisters (no, not those ones) are stricken with a series of strange plagues. Let's talk about family nightmares. I mean, uh, memories

I've discovered so many of my favorite playwrights thanks to Clubbed Thumb, and I keep going back to their shows because I want to know who the most exciting new artists are. Theater in this country would be much less interesting without Clubbed Thumb.” ~ Heidi Schreck, writer and star of What the Constitution Means to Me

“To your cherished list of warm-weather city pleasures, you should think about adding Summerworks. Now 23 years old, this staple of the East Village culturescape … allows you to say you knew certain rising playwrights before your friends did.” ~ Ben Brantley, New York Times