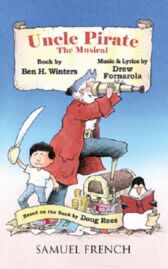 Wilson is just your average kid

Then one day he finds out his uncle is a pirate

With help from Uncle Pirate and his talking penguin, maybe, just maybe, Wilson can survive the fourth grade

Piano Score available to Rent - Runs about an hour

CAPTAIN JACK a wise-cracking penguin; played by an actor in a penguin suit

WOMAN 1 (Mom, Carla, various pirates and kids) - Mom is the sensible long-suffering mother of Wilson; Carla is a bullying eight year-old with pigtails and a perpetual scowl

WOMAN 2 (Miss Quern, various pirates and kids) - Miss Quern is a secretary who looks and acts like a librarian; prim and proper, hair in a bun, etc

MAN (Dad, Principal Purvis, Mr. Twissel, various pirates and kids) - Dad is the sensible long-suffering father of Wilson; Principal Purvis is a shifty-eyed middle-aged man whose great love is making life hard for children; later Purvis is revealed to be a pirate; Mr. Twissel is terrified of everything, especially fourth graders

"At heart Uncle Pirate proves more of a Boy Scout than a buccaneer, but that won't distress theatergoers under 12, this diverting and often funny musical's ideal audience ... Theatergoers at a recent performance particularly enjoyed a classroom duel in which Uncle Pirate bravely wields first a pointer, then a ruler and finally a book. Education, it seems, really is the way to win life's battles" ~ The New York Times

"There's a talking penguin and plenty of 'arrrs!' for the young'uns, while elementary schoolers and their parents will appreciate the sarcastic dialogue and clever songs ... a whimsical adaptation of the eponymous kids book is Jolly Roger fun" ~ Time Out, New York