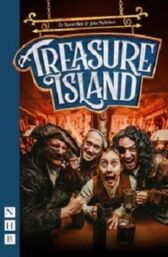 An hilarious, rip-roaring, swashbuckling, family-friendly retelling of the classic story ...

And a parrot called Alexa!

A mysterious tropical paradise in the Caribbean named Treasure Island

It depends who you ask

This riotously chaotic adaptation of Robert Louis Stevenson’s beloved Treasure Island is a collaboration between John Nicholson (The Hound of the Baskervilles) and the physical-comedy theatre company Le Navet Bete, with their four actors playing dozens of characters.

It follows the company’s hilarious, hit adaptations of Dracula - The Bloody Truth and The Three Musketeers

So if you’re looking for a rip-roaring, swashbuckling, family-friendly retelling of a classic story to perform with your theatre company or drama group, look no more

'Great fun... a version of Stevenson’s novel that not only entertains, it refreshes the narrative for a modern audience' ~ The Reviews Hub