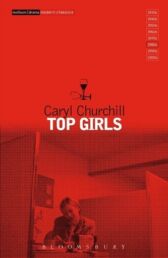 Her guests are five women from the past:

Dull Gret, who as Dulle Griet in a Bruegel painting, led a crowd of women on a charge through hell

And last but not least, Patient Griselda, an obedient wife out of Chaucer's Canterbury Tales

A seminal classic of contemporary theatre, Top Girls Churchill's play was a landmark for a new generation of playwrights

It premiered at the Royal Court in 1982

"A blistering yet sympathetic look at women who achieve success by adopting the worse traits of self made men ... Truly original" ~ N.Y. Times

"Top Girls has a combination of directness and complexity which keeps you both emotionally and intellectually alert. You can smell life, and at the same time feel locked in an argument with an agile and passionate mind" ~ John Peter, Sunday Times