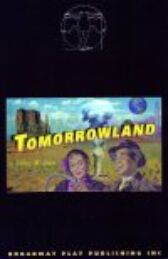 "The essence of Jeffrey M Jones' Tomorrowland play is collision ...

Genres collide so hard they take on each other's characteristics

Conventional images careen into walls of tension, anxiety and neurosis

What seems to be real keeps banging into what actually might be real. It's not pretty. It is very funny and unusually stimulating

Tomorrowland has been created totally out of found texts quoted from movies, pulp fiction, T V sitcoms and game shows, advertisements, political transcripts and journalism, all turned out in 1950, the salad days of the post-War period and the peak of American feel-good optimism

The stories are intercut and juxtaposed, each commenting on and influencing the way we see the others

They ultimately become so thoroughly mixed that they meld together becoming a fascinating, interwoven collage that shows American culture in ways we've seldom viewed it

There's clearly a lot of play in this play, but Jones takes it far beyond the parlor game of spin the radio dial. His intertwining narratives are intelligent and insightful without losing the ironic wit and sense of play at the theatrical heart of the work" ~ Mike Steele, Minneapolis Star & Tribune

"Mobius strips in which formal experiment twisted into and became satire ..." ~ Alisa Solomon