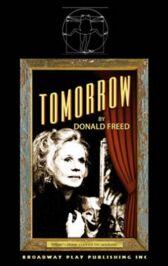 Tomorrow is a treat ... containing elegant dialogue and characters that are rich and fascinating

The story concerns three extraordinary actors and explores a singular form of teacher-student relationship along with the devotion of actors to their art, all permeated with a sense of secrecy and an expectation of impending revelations

As the play begins, Laura Keating, a rising young star, has been offered the part of Lady Macbeth and comes to the Hollywood home of Abigail Booth, a 100-year-old member of the celebrated acting family, hoping to persuade the doyenne of the stage to coach her in the role

Laura offers Abigail her house, but Abigail says, "I want your soul"

After much entreaty Abigail agrees to work with Laura every other day for a week, the intervening days to include coaching by James Booth, purportedly Abigail's nephew, though Abigail sometimes calls him "son."

He also manages to slip in some political statements - Tomorrow is set in December of 2000, and we hear news reports in the background about the presidential election and the Supreme Court decision in favor of George Bush

Freed draws a subtle parallel between Macbeth's stealing of the throne by murdering the king and Bush's "theft" of the election ~ Iris Mann, Backstage

"Donald Freed is a writer of blazing imagination, courage and insight. His work is a unique and fearless marriage of politics and art. I take my hat off to him" ~ Harold Pinter

"We are in the presence of an outstanding dramatic artist, one of huge intelligence, political daring and theatrical imagination" ~ The Gate Theatre, Dublin