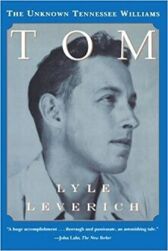 The riveting, revelatory, and sole authorized account of the critical first decades of Tennessee Williams' life

Tennessee Williams, author of such indelible masterpieces as The Glass Menagerie and A Streetcar Named Desire, is considered by many to be the greatest literary artist of the American theater

Tom is Lyle Leverich's definitive account based on his exclusive access to letters, diaries, unpublished manuscripts, and family documents of Williams' early life and of the events that shaped this most autobiographical of dramatists

It tells the story of the marital traumas of his bullying father and overly protective mother, the mental disorders that institutionalized his beloved sister Rose, his stalled academic career, and his confused sexuality and early successes as a writer