To Kill a Mockingbird - REVISED 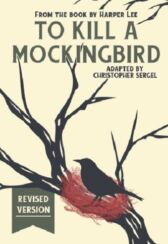 Scout, a young girl in a quiet southern town, is about to experience the dramatic events that will affect the rest of her life

She and her brother, Jem, are being raised by their widowed father, Atticus, and by a strongminded housekeeper, Calpurnia

Wide-eyed Scout is fascinated with the sensitively revealed people of her small town, but, from the start, there's a rumble of thunder just under the calm surface of the life here

Atticus, a lawyer, explains that he's defending a young Negro wrongfully accused of a grave crime

Since this is causing such an upset, Scout wants to know why he's doing it

"Because if I didn't," her father replies, "I couldn't hold my head up"

When she asks why take on such a hopeless fight (the play is set in 1935) he tells her, "Simply because we were licked a hundred years before we started is no reason not to try"

He goes on to prepare Scout for the trouble to come.

"We're fighting our friends. But remember this, no matter how bitter things get, they're still our friends"

A Sound Effects Tape is available separately by clicking here