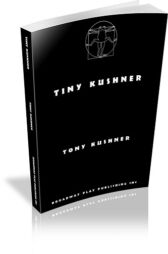 Replete with scintillating turns of phrase, rich in wit and wisdom, and branded with his trademark intelligence, here are five marvelous short plays by one of the most gifted playwrights of his generation ...

A year after his death in Paradise

Lucia Pamela, Miss St. Louis 1926, and the Queen of Albania meet on the moon

As the evening progresses, a musical comedy play is born

Only We Who Guard the Mystery Shall Be Unhappy - M2,F1

As an Angel watches over the proceedings

A therapist tries to rid herself of a difficult patient

While the pair's lovers hover in the ether

"Tony Kushner's new work consists of five one-act playlets that feature both fictional characters and those borrowed from real life - including Dr Arnold Hutschnecker, who was Richard M Nixon's psychiatrist

Two plays have therapy sessions in them, actually

Three have dead people as characters

One takes place on the moon

All five, however, resonate on the subject of America and the moral complexities created for its citizens by its various advantages in the world ... Mr Kushner's fierce liberal conscience (he's Arthur Miller's heir, in that regard), colossally fanciful imagination and virtuosic gift for composing verbal arias are much in evidence" ~ Bruce Weber, The New York Times