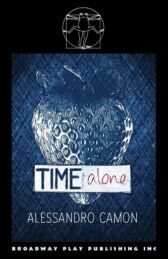 Both end up in places of extreme loneliness ...

And the silent house of the bereaved

As time itself seems to unravel, their tales both contrast and mirror each other, providing answers to each other's questions

Until they find new doors to life

"I was riveted sharp writing and observations In their haunted isolation, for all their differences, victim and perpetrator both experience time as a tool of torture. And then, in a twist I can't give away, they discover a connection that carries with it a hint of redemption" ~ Steve Lopez, Los Angeles Times

"Alessandro Camon's two-hander transpires in overlapping monologues between Anna Jackson, a traumatized shut-in whose police officer son was killed in the line of duty, and Gabriel Wayland, a prison inmate in solitary confinement. The characters - both sympathetic, both impassioned - hold forth about their radically different views on the nature of time, regret and the criminal justice system. Gabriel speaks from his cell, Anna from the prison-like home His drama comes full circle in a beautifully realized denouement that emphasizes not only our human need for connection, but our innate and sometimes surprising capacity for forgiveness" ~ F Kathleen Foley, Los Angeles Times