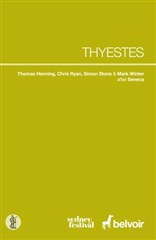 In this modern version, reimagined by four young writers, the boundaries of Seneca's play have been blown out to encompass the matrix of killings in the original myth

A series of moments between atrocities, Thyestes explores the constant that has underpinned human nature across the centuries: that man is brutal, capable of anything

And in the spaces between the banal and the ordinary, terrifying acts occur