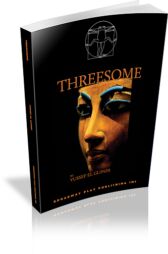 "A fascinating and unforgettable comedy"

But what begins as a hilariously awkward evening soon becomes an experience fraught with secrets, raising issues of sexism, possession, and independence.

"Playwright El Guindi has built an elaborate, intellectual, and dense treatise, where sex, international politics, and feminism intersect Make no mistake; this show is worthy of your time and attention" ~ The Portland Mercury