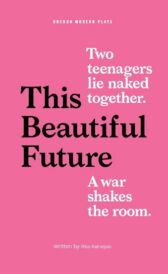 A play about love in the extreme, set in occupied France during World War II

She washes her legs before going to church

She believes in God

And eyes that could pierce tanks

He was part of a firing squad today

Outside, the world around them is exploding

Inside, the room shakes

★★★★★ A teenage Nazi soldier and a French girl secretly meet on the eve of the American army's triumphant arrival, spending one last night together before their worlds are turned upside down ... This Beautiful Future mines this compellingly weighted scenario for all it's worth ... nothing is straightforward ... An extraordinary work" ~ The Stage

"... an exquisite, beautiful piece performed with such truth, delicacy and daring. Blown away" ~ Juliet Stevenson