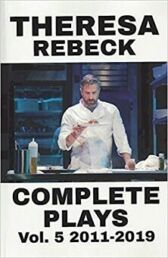 Characters who aren't daunted by conflict

Who aren't afraid of their anger

Who don't over-intellectualize or deflate into introspection

Who embark on crusades of the soul, noble and vulnerable

Which is why Rebeck's characters are so human

The 7 plays in the Collection are :

Bernhardt/Hamlet, which opened on Broadway in 2018 starring Tony Award-winner Janet McTeer as stage legend Sarah Bernhardt, as she prepares to tackle her most ambitious role yet - Hamlet

Seared, which premiered at Williamstown Theatre Festival in 2018, followed by an OCC award-winning run at MCC Theater in 2019 starring Raul Esparza as a Brooklyn chef caught between art and commerce

Downstairs, a provocative family drama which starred real-life brother and sister Tim Daly and Tyne Daly for its world premiere at Dorset Theatre Festival and its Off-Broadway debut premiere at Primary Stages in 2018

The Way of the World, which Rebeck also directed, premiere in 2016 at the Dorset Theatre Festival and starred Kristine Nielson, a frequent interpreter of Rebeck’s work

Poor Behavior, an indecently funny comedy about a weekend in the country that spins out of control

Fool premiered at the Alley Theatre in Texas in 2014. Set in a medieval kitchen, this is an original dramatical comical farcical tragical play about power, love, laughter and death

The Nest, an explosive comedy that holds a cracked mirror up to friendships, romantic relationships and families, premiered at the Denver Center for the Performing Arts in 2016