Theatre in Scotland - A Field of Dreams 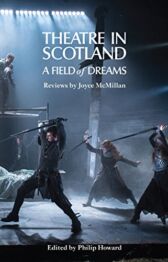 "When Scottish theatre works its magic over the coming years, I will be there, to try to catch the moment in print, and to tell it as it was. And believe me, on the good nights and the bad ones, the privilege will be mine: to be paid to go looking for joy, and occasionally to find it" ~ Joyce McMillan

Joyce McMillan, lead drama critic at The Scotsman, is an unrivalled authority on modern Scottish theatre and a leading thinker and writer about Scotland

Theatre in Scotland - A Field of Dreams is a collection of more than three decades of her writings about theatre, selected by theatre director Philip Howard

During that time she has borne witness to an extraordinary cultural and political renaissance in Scotland, reflected in the newfound confidence of its playwrights, in the vibrancy of its theatre culture and in its recent outburst of new theatre companies

This panoramic history of modern Scottish theatre traces the remarkable journey of Scottish theatre towards its new self-confidence - the road to 1990, when Glasgow was European Capital of Culture, followed by the explosive expansion of the 1990s; culminating in the emergence of the National Theatre of Scotland and its drive to bring theatre culture right into the heart of the nation

There are reflections on the great Scottish plays, classic Ane Satyre of the Thrie Estaitis, Men Should Weep and modern Black Watch, The James Plays

There are reports not only from the urban theatre centres of Edinburgh and Glasgow but from all over Scotland; and from the feast that is the Edinburgh Festival, to the nourishing A Play, A Pie and A Pint

A leading thinker and writer about Scotland, McMillan has an incomparable ability to detect the wider cultural resonances in Scottish theatre, and to reveal what it can tell us about Scotland as a whole

Her book serves as a portrait of a nation and a shared cultural life, where visions of 'what we have been, what we are, and what we might become' are played out in sharp focus on its stages

"Joyce has an unrivalled passion and hunger for theatre - to be surprised by it, challenged by it, moved by it. Her prose when describing something which has done just this is inspiring and affecting"' ~ Vicky Featherstone

"She has, to my knowledge, an almost unblemished record in never having failed to spot a great new play" ~ Philip Howard, from his Foreword