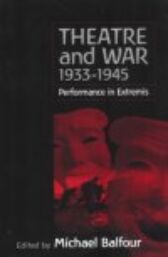 Of interest to students of cultural studies, theatre studies and European history, as well as to the general reader fascinated by this little-known aspect of the European scene during the 1930s and 1940s

The book includes a wide range of diverse essays telling many interesting stories, notably George W. Brandt's first-hand account of his theatrical activities as a German internee in Britain during the war, and Alexander Solzhenityn's tale, excerpted from his famous The Gulag Archipelago, of amateur theatricals in Stalin's labour-camps