The Witch of Edmonton - Arden Edition 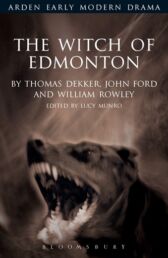 Her story was on the bookstalls within days and within weeks was adapted for the stage by renowned Jacobean playwrights Thomas Dekker, John Ford and William Rowley as The Witch of Edmonton

Torn between sympathy for Sawyer and Thorney and a clear-eyed assessment of their crimes, the play was the finest and most nuanced treatment of witchcraft that the stage would see for centuries

Reading Elizabeth Sawyer in 1621
Witchcraft and Bigamy: 1621 and 1658
Danger and Death: Tragicomedy and Domestic Drama in 1621
Curtain and Cockpit: Staging the Supernatural in 1621
London and Lancashire: Staging Witchcraft in 1634
The Witch and the Dog

The Witch and the Dog: Reprise

THE PLAY : THE WITCH OF EDMONTON