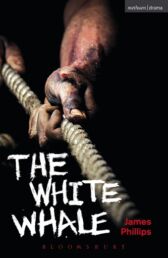 "You remember when we started to hunt whales again? We fought monsters and we killed them and wrestled the oil from their dead bodies and we sold it

In the future we hunt whales for the oil in their bodies. Just like they did in centuries past. The oil of a single whale can run an army for a week

This is new science. This is our future. So we send gangs of men out onto the dark, cold sea to bring back the things we need"

Ahab is going for revenge

Revenge on the greatest whale in all the oceans: a perfectly white whale

And Ishmael - a young man new to whaling - is going to sea seeking a hunter's violence, trying to stop the thoughts of violence in his heart

And we are all going with them ...