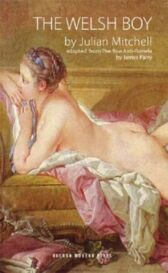 "The true anti-Pamela: Or, memoirs of Mr. James Parry ... In which are inserted, his amours with the celebrated Miss P- of Monmouthshire. Written by himself"

It's based on the scintillating rediscovery of one of the hidden gems of eighteenth century literature, bringing back to life a true story of passionate love and outrageous sexual scandal ...

Mary Powell is the richest heiress in the district

And its most daring

But sex is one thing, love another

And marriage yet a third

The play is based on The True Anti-Pamela, the personal diaries of James Parry which he had published as an act of revenge against his former lover

He saw their torrid affair as a direct inversion of Samuel Richardson's contemporary bestseller, Pamela, Or Virtue Rewarded, with himself in the role of lowly-born innocent and Mary Powell the aristocratic villain of the piece

"Vivacious and utterly engaging There is not a breath out of place in this totally absorbing script, the attention to detail is masterly" ~ What's On Stage