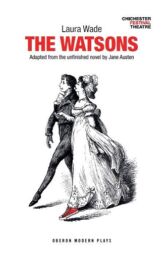 Emma and her sisters must marry, fast

If not, they face poverty, spinsterhood, or worse - an eternity with their boorish brother and his awful wife

Luckily there are plenty of potential suitors to dance with ...

From flirtatious Tom Musgrave to castle-owning Lord Osborne, who's as awkward as he is rich

So far so familiar

But there's a problem - Jane Austen didn't finish the story

So who will write Emma's happy ending now?

Based on Austen's incomplete novel, this sparklingly witty play asks what can characters do when their author abandons them?

Reviews "Laura Wade's approach to completing the unfinished manuscript is every bit as clever, witty and resourceful as an Austen heroine presented with a problem to solve ... The Watsons is meta, yes, but it's also a very moving reflection on authorship particularly female authorship" ~ The Stage ★★★★★

"One of the play's many pleasures is its capacity to endlessly take us by surprise. We go in expecting a literary exercise and come out having seen a philosophical comedy... wrestles with the impertinence of completing a literary fragment, yet it rejoices in the limitless possibilities this affords... Wade has seized on this tension between authorial control and imaginative freedom to create a stunning play" ~ The Guardian ★★★★★

"An affectionate and entertaining skewering of the Jane Austen comfort zone ... Laura Wade knowingly becomes a part of the rapacious Austen industry with her very funny adaptation" ~ The Telegraph ★★★★

"A brilliant, if wayward creation, in which Wade, rather than tacking an ending on to Austen's fragment, plunges into it to explore, among other things, the creative process and the value of art" ~ The Times ★★★★